Get tips on how to exercise your rights when confronted with aggressive cops. Hear about new laws and bills introduced in California that could serve as examples to be used nationwide.

Contains explicit lyrics. Search for the "clean" version a day after publication for a censored version. 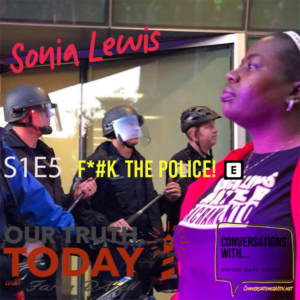 Sonia Lewis is a native of California and since the age of 7 has challenged systems that discriminate against people based on race and economic status, when in the 2nd grade she refused to say the “Pledge of Allegiance.” A graduate of Spelman College of Atlanta, GA, Sonia holds a dual BA degree in History and Psychology. Sonia went on to further her education by earning a Secondary Teaching Credential and Master’s degree in Education from San Francisco State University. Sonia spent more than 20 years in the traditional classroom teaching Social Studies and managing a small magnet program that focused on Criminal Justice. During her time with the Criminal Justice Academy, Sonia saw first-hand the flaws in law enforcement training and implicit bias interactions with the Black community. At the height of the recession in 2009, Sonia left the traditional classroom and started an educational consulting business focusing on bridging the gaps of inequity for Black students, called ASCRIBE Educational Consulting.

The deaths of Trayvon Martin, Eric Garner, Michael Brown and Sandra Bland led to Sonia joining and becoming a leader in the Sacramento chapter of Black Lives Matter. While on this journey, Sonia has been on a mission to marry education and what it means to be a social justice activist, with the goal of preparing future generations to advocate and fight for equity, representation, justice, and reparations. In pursuit of Black liberation, Sonia has been instrumental in Sacramento with organizing and leading the movement as a chapter lead with Black Lives Matter Sacramento. Sonia is an extended family member of Stephon Clark and has been on the frontlines of efforts to hold law enforcement accountable and move for transparency and equity in Sacramento and throughout the state of California from the passing of local ordinances and state legislation to demanding a seat at the table with the intention of respecting the Black community. In this moment of the movement, Sonia is striving to not only be a change agent but a moral witness as we abolish the old normative of white supremacy while rebuilding a humanity where Black lives actually matter.

Transcripts are ocassionally provided as a courtesy. There is no guarantee of accuracy. In fact, because the transcriptions are machine generated we can say with confidence there WILL be errors in the transcription.

Transcript not yet available for this episode